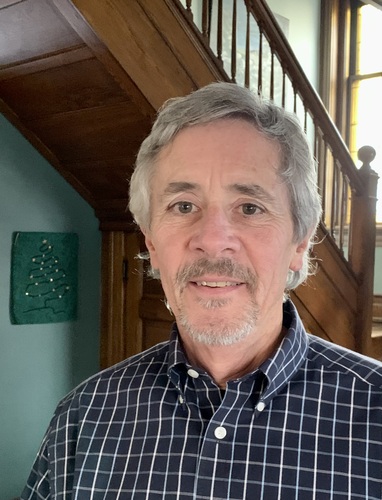 My wife Liz and I moved to Philadelphia in July of 2020, after I accepted the position as Director of Business Administration for the Presbytery of Philadelphia, PC(USA).  My wife, Liz, is an ordained Presbyterian minister who currently works as the Finance Director at Wayne Presbyterian Church.

We moved to Center City in July of 2021 after living a year in Roxborough.  We joined Old Pine a couple of months ago.  We have two sons, young men, and a daughter-in-law who also live in Center City.  We have lived in Ohio, Texas, Arkansas, and our adopted hometown of Charlotte NC, where we raised our family.  I am a CPA and worked in the business world for about 40 years for various companies.

For about 4 years I was co-owner and general contractor in Charlotte focused on new residential construction and remodeling until the housing market collapse of 2009.  While in Arkansas I volunteered at Crystal Bridges Museum of American Art, serving as a tour guide for a Frank Lloyd Wright Usonian home, which was reconstructed on site. I have volunteered at the not-for-profit organizations: The Community Culinary School, Love, Inc., and the Urban Ministry Center (now named Roof Above) all located in Charlotte NC.