Tucked away in the bounds of Old Pine’s historic graveyard is the little known memorial to world famous orchestra maestro Eugene Ormandy and his wife Margaret (affectionately known as Gretel). How did a diverse-faith couple, married by a municipal judge, come to be interred in a historic Presbyterian church burial ground? 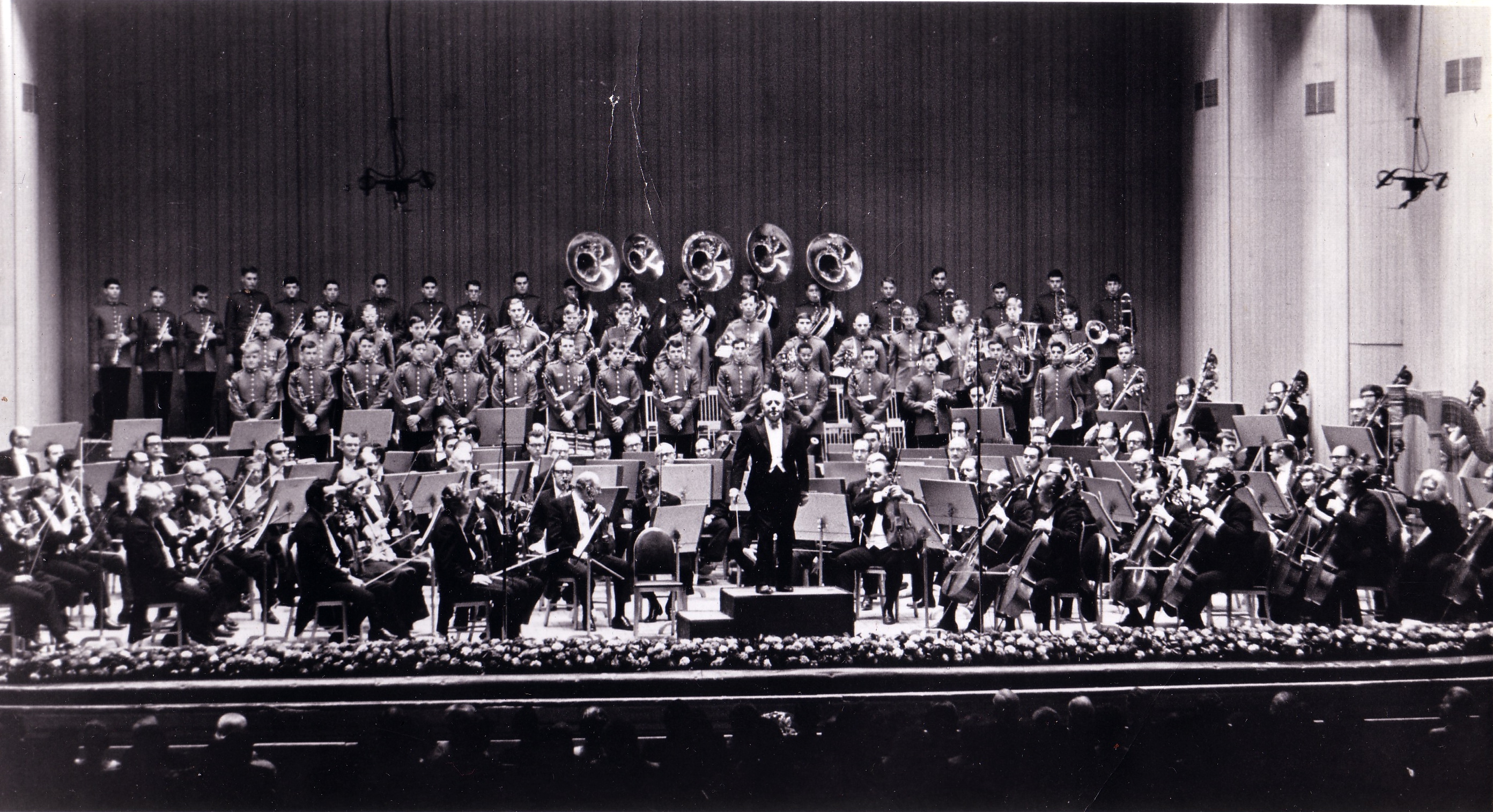 January 1970. The Philadelphia Orchestra, conducted by Eugene Ormandy, and the Valley Forge Military Academy Band under the leadership of Colonel D. Keith Feltham, performed the “1812 Overture” (full title: Festival Overture “The Year 1812”, op. 49); by Pyotr Ilyich Tchaikovsky live at the Academy of Music in Philadelphia, PA.

January 24, 1970 – Presenting the Presidential Medal of Freedom to Eugene Ormandy required President Richard M. Nixon to travel to Philadelphia. On stage at the Academy of Music, Nixon proclaimed “That the highest experience that could ever have come to him was to have ‘Hail to the Chief’ played by the Philadelphia Orchestra under Eugene Ormandy.” Nixon’s trip to Philadelphia broke with protocol to bestow the Presidential Medal of Freedom. Ormandy said he could not attend the traditional ceremony at the White House unless all 105 orchestra members were invited. A daunting question lingers. On the evening of January 24, 1970, did playing “Hail to the Chief” honor one or two chiefs?

During the celebration of America’s Bicentennial in 1976, Queen Elizabeth II, while visiting Philadelphia, appointed Maestro Eugene Ormandy an honorary Knight Commander of the Order of the British Empire (KBE). He is, without question, the only knight buried in the Old Pine Street Presbyterian churchyard. He also received Kennedy Center Honors in 1982.

As Ormandy was nearing the end of hospice-at-home, Gretel asked her husband’s attending physician to contact a clergyman. Immediately, he phoned his young friend, pastor at Old Pine Street Presbyterian Church, who was at Ormandy’s bedside within the hour. Realizing life had passed, those present reverently joined hands as the pastor quoted expressive words of scripture and comfort. It was a very private, emotional moment. The next day the pastor phoned Gretel, concemed she was grief stricken. The ensuing visit initiated a continuing dialog. She made it quite clear that ‘in life, my husband belonged to the world, now he belongs to me.” As spring approached, Gretel welcomed an invitation to visit Old Pine’s graveyard. Impressed with the informal solitude, it was here she chose to honor her husband’s noteworthy life. A decorative vintage iron fence defines the plot and encloses the Ormandys’ monolitlic granite marker, carved in intaglio with their names, birth and death years, and the Philadelphia Orchestra’s heraldic harp logo. However, May 15, the single most heartfelt day in the Ormandys’ life, remained private until Gretel’s death and interment in 1998. By written agreement with her estate, Old Pine Street Church is to annually place a dozen roses on the gravestone to celebrate the Ormandys’ wedding anniversary. And so a very private love story lives on.

Bom in Vienna in 1909, Margaret Francis Hitsch, as a young woman, worked as a secretary in financial firms. Jenö Blau (name changed to Eugene Ormandy in 1921 after immigration to the United States) and her family had been long-time European friends. Ormandy, knowing Margaret hoped to immigrate to the United States, became her sponsor in 1936, tendering employment as an assistant. During World War II, Margaret earned a pilot’s license and becanie a control tower operator at the Naval Air Station in Norfolk, VA. Naturalized as an American citizen in 1943, she married Ormandy on May 15, 1950. His devoted wife, affectionately known as Gretel, became a steadfast helpmate. She accompanied him on all Philadelphia Orchestra tours, domestic and worldwide. Gretel was prominent in key roles with the Central Committee of the Volunteer Committees for the orchestra.

After her husband’s death in 1985, Gretel continued to support the orchestra as well as other cultural and charitable causes, which included recording for the blind and dyslexics. She died on May 31, 1998 of natural causes following a stroke and several years of declining health. By her request, interment was private at her husband’s memorial gravesite, a semi-secluded plot she had selected 13 years earlier in the Old Pine Street Presbyterian Church graveyard.